Try as I might, I still don’t quite know what makes a piece “click” for a listener. Sometimes, a composition I think is brilliant gets little more than a lukewarm response. Other times, something that I think is pedestrian has audiences applauding for more. My own fluctuating and nonsensical responses to various works have baffled both myself and others! It really does not make sense.

(For an artist seeking to create works that resonate, this enigma can feel like an ocean of frustration. During these times, the quote at the end of this post is both buoy and beacon.)

While the lack of control can leave one feeling rather inept, the upside to the situation is that getting it right - getting something you think is honest and worthwhile to connect with and move audiences - can feel like nothing short of a miracle.

One composition of mine that falls into this category of unlikely winners is called In Mourning. Written with and for my friend Britta Swedenborg, it is the first piece I wrote whose unrevised version I still stand by today. Somehow, despite my inexperience and lack of anything resembling proper technical skills, I feel I got it right. Moreover, other people seem to think the same: since its premiere in 2011, it has seen over 30 performances in the US and the UK and been consistently lauded despite its unpretty and uncompromising nature.

Now, thanks to Sean Gabriel of the Cleveland-based No Exit New Music Ensemble, it will soon hit the 40-performance mark.

To celebrate this occasion and whet your appetite for the performances to come, I have released a remastered version of the original recording Britta and I made six years ago (apologies, a score is not yet available to the public - but will be soon!).

While I love this recording, I cannot overstate just how different the experience of the piece is live. There is more there than just notes. Something else - maybe that very something that I spoke of at the beginning of this post - happens when a room full of people bears witness to the act of performance. I hope you will be one of those people, bearing witness, experiencing the atmosphere, and contributing the powerful, yet unspoken exchange, that is a new music concert.

If you’re in the Cleveland (Ohio, US) area, No Exit is performing three concerts at three different venues - all free and open to the public. Details about the performances can be found here, here, and here (and on the poster below).

If you happen to be in the Twin Cities (St. Paul & Minneapolis, MN, US) area, No Exit is joining forces with the St. Paul-based Zeitgeist New Music Ensemble as they celebrate their 40th season. Tickets can be found here. 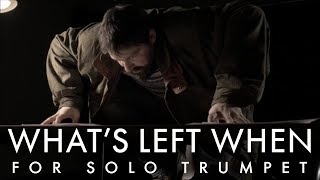